Most Successful Teams In IPL According to Stats and Wins

How Easy Is It To Install Decorative Wall Panels?

Read More
How Easy Is It To Install Decorative Wall Panels?

Why are Personalized Plaques Better Gifts?

What Are the Most Important Insights About the Commutative Property Which Everybody Should Know?

Read More
What Are the Most Important Insights About the Commutative Property Which Everybody Should Know?

PDF to PNG Converter: When Should You Use A PNG File

Read More
PDF to PNG Converter: When Should You Use A PNG File

Convert Your PDF to Word Quickly and Easily With PDFBear

Dua to make my husband love me, keep me your queen

Read More
Dua to make my husband love me, keep me your queen

6 activities you must experience in Hyderabad

Read More
6 activities you must experience in Hyderabad

Top 4 Essential Things You Should Know Before Purchasing Canvas Tarps

Important things you have to know when driving in Dubai

Most Successful Teams In IPL According to Stats and Wins

The popularity of cricket in India is hard to put in words. It’s a game that gets the country together in cheering for their team and praying fervently before each crucial match. And an annual celebration of the game that makes the excitement reach its peak in the country is the Indian Premier League (IPL).

Eight teams named after eight Indian cities come together to showcase their best performance and win the trophy after a month-long season of cricket. As the fans start comparing the stats, wins, and winning percentage of IPL teams, let’s give you a brief rundown of the most successful teams in the game.

IPL has completed thirteen electrifying seasons during which several teams have made cricketing history with their performance. But which of these teams have been the most successful? Read on! 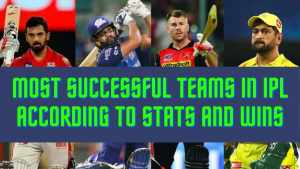 The Mumbai Indians had one of the slowest starts in IPL as they finished at fifth and seventh in the starting seasons of the game. But it did not take too long for them to make a comeback as they have only been absent from the playoffs twice in nine seasons.

They won the championship title in the years 2013, 2015, 2017, 2019, and 2020, under the skilled captaincy of the highly talented Rohit Sharma. The Reliance Group is the owner of the team. Mumbai Indians remain at the top of this list, with a winning percentage of 58.1 percent. Well, we can say that Mumbai Indian is one of the best team and they are improving their performance day by day. No doubt, in future Mumbai Indian can be one of the strongest team among all.

Though the Mumbai Indians are immensely successful in the game, the highest winning percentage in IPL of 59.68 percent is still held by the Chennai Super Kings. In fact, these two teams have always been each other’s strongest competition.

Chennai is led by Mahendra Singh Dhoni, the man who had led Team India to several major victories. He has been leading the team from the front since 2008, and they have won the title thrice (2010, 2011, and 2018) under his captaincy. They have won 111 matches out of the 186 played so far and tied in just one match to date. Let’s see what they have in store for us at Indian Premier League 2021. Chennai Super Kings is said to be the strongest team because of its players. Mahendra Singh Dhoni has put up his effort to make his team best and stand at the top among other in Indian Premier League.

Kolkata Knight Riders get the third position on the list of the most successful teams in the game. Under the captaincy of Gautam Gambhir, the team has won the highest number of consecutive matches in IPL. In fact, they won the IPL title twice in the years 2012 and 2014.

Dinesh Kartik is the current captain of the team, and the boys have really been performing well under his guidance. The team has played 202 matches in total and emerged a winner in 100 of them. It has an impressive winning rate of 49.5 percent.  We have seen Kolkata Knight Riders are continuously working hard to improve their performance and perform better in upcoming matches in Indian Premier League.

Royal Challengers Bangalore is a good team that has been having a stroke of hard luck for a long time now. They have shown excellent gameplay time and again in IPL, and yet, they continue to miss the trophy by a whisker. Led by Virat Kohli, the current captain of Team India, they have ended up as a runner-up at least thrice in the game.

Furthermore, the team has gone through some major tribulations. They are the ones with both the highest and lowest totals in the game, i.e., 263 and 49, precisely. Currently, they hold a winning rate of 46.08 percent.

And the last team on this list is Delhi Capitals, with a winning percentage of 43.84 percent in IPL. The team started off as ‘Delhi Daredevils’ and usually remained at the bottom of the points’ table. Soon enough, there was a major makeover done to the side, and tables turned finally.

At present, it is one of the most meticulously put-together teams of promising youngsters who are raring to show their best game. In fact, Delhi Capitals also have the youngest skipper – Shreyas Iyer. The winning rate of Delhi Capitals is still pretty impressive at 43.84 percent.  Rishabh Pant is working hard to make his team come up with the draw backs which his team has been facing in the past matches. Hope, they will work on it and in future we can expect a better performance from Delhi Capitals in Indian Premier League.

All the above five teams has performed excellent in Indian Premier League. One can say that these are one of the best teams one can choose as their favorite because of their players and the way of game they play in India Premier League.

So, which of these five teams are you supporting in Indian Premier League 2021? Or, do you have any other favorites for this year? No matter which team you support, stay tuned with Purewinnews for getting all the latest sports updates in one place.

Pure win news brings all the latest sports news and today’s sports headlines and catches up with the updated and breaking cricket news, detailed score, result analysis on trending cricket topics. Visit Pure win news to get up-to-the-minute news around the world at one place.

We help sports lovers to stay tuned on everything latest in the sports club. We object to providing important updates regarding information of  sports news with upcoming matches details, schedules, score and result for the most well known leagues like the IPL,CWC, Hockey India League, Pro Kabbadi League and many others.

Our news platform helps the visitors to know what’s going on in the sports and teams. From die hard fans to players and managers, everyone loves staying connected with Pure Win News for the latest sports buzz!